Only nine months into the year, new annual records were set for the value of global mergers and acquisitions and private equity in 2021—and markets are set to remain active in the fourth quarter of the year.

We are witnessing a rare convergence of robust deal activity from PE, corporate, and special purpose acquisition company (SPAC) participants, the three pillars of M&A, which together buoyed market confidence to a new high. Heading into the fourth quarter and beyond, we see a strong pipeline of M&A activity, supported by high levels of market confidence, favorable monetary policies, and financial conditions; driven by fast-changing industry landscapes; and enabled in no small part by more efficient deal-making. 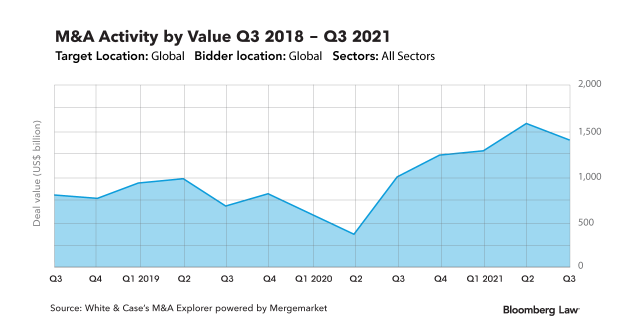 High levels of cash reserves reinforced by strong fund raising, low interest rates, and confidence in the economy’s successful emergence from Covid-19 all contributed to the third quarter activity. After the cash harvested from successful exits are returned to investors, the same investors will need to redeploy the cash, likely in new buyout funds that will then go out to hunt for new targets, resulting in a virtuous cycle for M&A activity.

Technology, media, and telecom continues to be the most active of any sector by value and volume. This is perhaps the result of the increasing number of TMT-focused PE funds in recent years, an increased dependency on technology during the pandemic and the larger size of this sector in the overall economy.

Looking ahead, we expect strong PE performance through year-end and beyond, if market confidence remains at current levels or higher.

Following an extremely busy first half, in Q3 we continued to see many corporate transactions. A total of 3,449 strategic transactions were announced in Q3, worth $904 billion in the aggregate. Software was a hotspot. The Avast/Norton LifeLock and PayPal/Paidy transactions were two of the quarter’s largest deals.

Across board rooms and executive offices, discussions of potential strategic transactions abound. This not only reflect businesses’ increasing comfort with making transformative changes as the economy recovers from the effects of Covid-19, it is also a reaction to (or anticipation of) other transformative transactions undertaking by competitors as well as other disruptive forces.

We expect that heavy deal-making by strategic players will continue into 2022 because of improving macro-economic conditions, refocus of strategic priorities and the changing competitive landscape. Potential headwinds, however, include supply-chain disruption and long-term inflation, which could create more uncertainty and divert corporate attention and resources away from strategic transactions.

In general, we are seeing slower PIPE (private investment in public equity) processes and more selective PIPE investors. Certain de-SPAC transactions announced earlier this year have had difficulty in getting to close, with some being terminated.

After an initial period of frothier activity, we may be at the start of a new cycle with more reputable SPAC sponsors and higher quality targets continuing to take advantage of the benefits of a de-SPAC process, which in turn would (re)instill confidence in SPACs generally.

As further evidence, we are seeing increasing comfort of big, sophisticated corporations exploring a de-SPAC as an alternative to listing a subsidiary or division, which we think is a trend that will continue.

Born as a necessity in 2020 due to Covid-19 lockdowns, remote deal-making has become the default mode of operation, even as lock-down restrictions are being lifted. Executing a deal on a largely virtual basis can significantly shorten the time required to get a deal done.

While we do not believe that in-person meetings for large and strategic transactions will be completely replaced by video conferencing calls, the ability to do deals virtually will have lasting implications on how quickly deals can be done in the future, enabling the market to execute more deals in less time.

M&A deal-making depends on the effective functioning of an ecosystem that involves multiple players and unpredictable exogenous factors. The convergence of a strong showing from all the three pillars of M&A (PE, corporate, and SPAC) reinforces the strong confidence in doing deals, which is being further enabled by a more efficient way of deal-making.

This gives us confidence that the historic level of M&A should continue to keep deal-makers busy well into 2022.

This column does not necessarily reflect the opinion of The Bureau of National Affairs, Inc. or its owners.
Write for Us: Author Guidelines

Arlene Arin Hahn is a partner in White & Case’s Technology Transactions Practice, within the firm’s Global Mergers & Acquisitions Practice and Global IP Practice in New York. She is a transactional attorney who represents clients in intellectual property and technology matters.

James Hu is a partner in White & Case’s Global Mergers & Acquisitions Practice and a member of the Global Private Equity Industry Group in New York. He represents both public companies and financial sponsors engaged in domestic or cross-border M&A, SPAC, or private equity transactions.